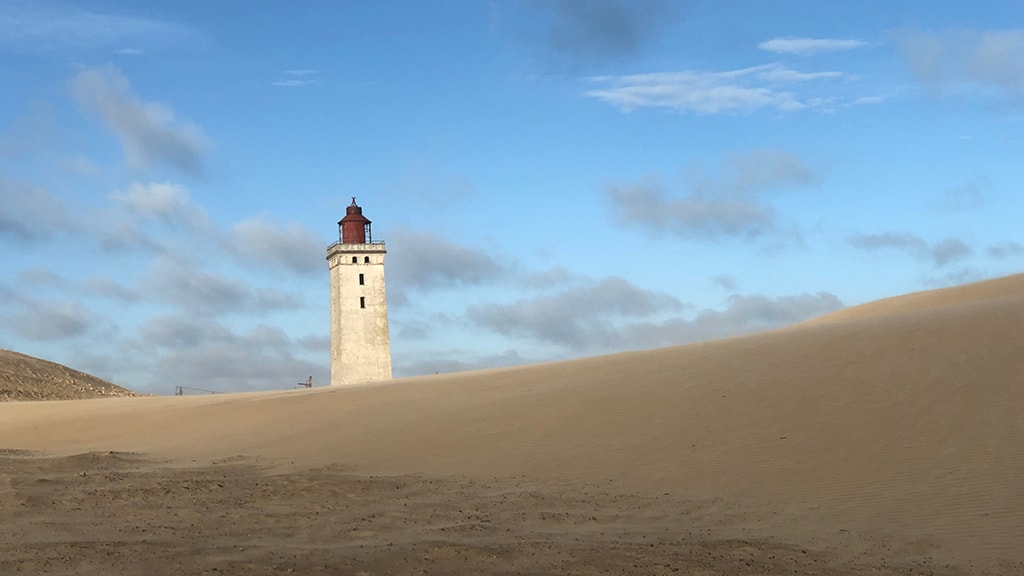 In 2019 is was decided to try to move the lighthouse. The project was given to a local builder, Murer Kjeld. In August 2019, preparations began for what would turn out to be a huge and quite unique event. For eight weeks, builder Kjeld and his team prepared for the move. They dug and moved tons of sand. They dug out the foundation of the lighthouse and reinforced it with several tons of iron and concrete. They moved sand away from the dunes in order to put rails down where the lighthouse would roll inlands.

We followed in the work weekly, which in addition to a fantastic view, also offered really harsh days with sandstorms. Despite harsh working conditions, builder Kjeld and his team worked every day with excavation and reinforcement, and it turned out to be of great interest from locals, tourists and the press. Every day many curious spectators followed the work, eagerly waiting for a date to be announced when the move was to take place. Finally, the date was announced, Tuesday, October 22.

On Tuesday, October 22, people gathered at Rubjerg Knude to attend this unique event. Over 20,000 showed up to watch the nearly 30-meter-high lighthouse roll on rails, 70 meters further inland. It was a WILD day! And with thousands of eyes on the lighthouse, it quietly and as planned rolled into Rubjerg Knude. The builder Kjeld and his team succeeded in moving Rubjerg Knude Fyr, which now has maybe 30 more years to live.

On Saturday, November 16, the lighthouse again gathered almost 8,000 people who came to celebrate the relocation. Here more than 300 choir singers, candles, dancers, and talks contributed to making this afternoon very special. We celebrated that Rubjerg Knude Fyr now is at a safe distance from the untamed North Sea and can provide locals and tourists with fabulous nature experiences for many years to come.

A big THANK YOU to builder Kjeld for daring to embark on this wild project and succeed!

Close by Lønstrup you will find the massiv and impressive Rubjerg Knude. It is located 90 meters above sea level and it is still growing in size. It is a very beautiful nature scenery where the ocean and sand is a very dramatic evidence too the fact that land is being eaten by the sea and several meters disappears every year.

When the lighthouse was built it was more than 200m inland and there were no large dunes around it. Over time the sea moved in closer and simultaneously the wind blew large amounts of sand up from the cliff. In the end the sand was so high that it was sometimes impossible to see the lighthouse from the sea. On August 1st 1968 the fight was given up and the light was lit for the last time. In 1980 a museum was opened, but unfortunately it was closed in 2002 due to coastel erosion and was moved to Strandfogedgården 3 km from the light house.

The light house was reopened in the spring of 2016 and a staircase was added, so you can see the spectacular view from the top. The lighthouse will within the next 10-15 year fall into the sea because of coastel erosion.